In 1970, Sister Bernarda Handrup became Alverno's third Vice President of Academic Affairs/Academic Dean. It was during her tenure that Alverno's Ability-based curriculum was created. She was Academic Dean from 1970 to 1974.

The Alverno College Research Center on Women (now known as the Research Center for Women and Girls) was established in April 1970 through the work of Sr. Austin Doherty, then Chair of the Psychology Department; Barbara Mulligan, Director of the Continuing Education Division; and Victoria Hinshaw, Political Science Instructor. 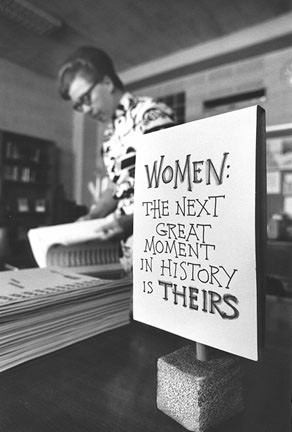 Sister Marian Schreiner in the Research Center on Women (RCW)

Babysitting Service, (renamed Childcare and now known as the Alverno Early Learning Center,) also began operating in 1970 after a rise in the number of non-traditional aged students. 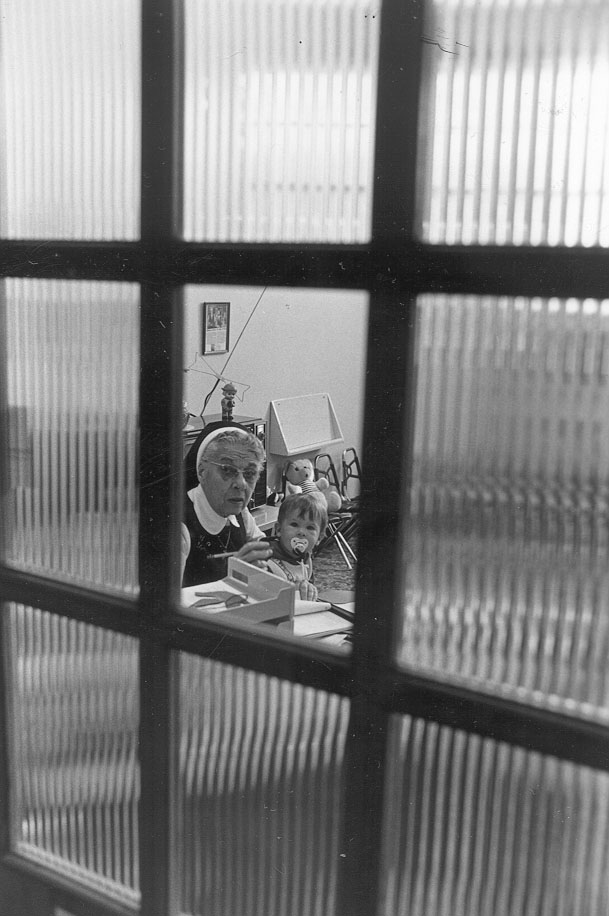 Peeking through the Babysitting Service door in the 1970's, we see Sister Solano Granger, its first director, with a child on her lap.

The Career Services/Placement Office, now the Career Studio, also opened its doors in 1970. 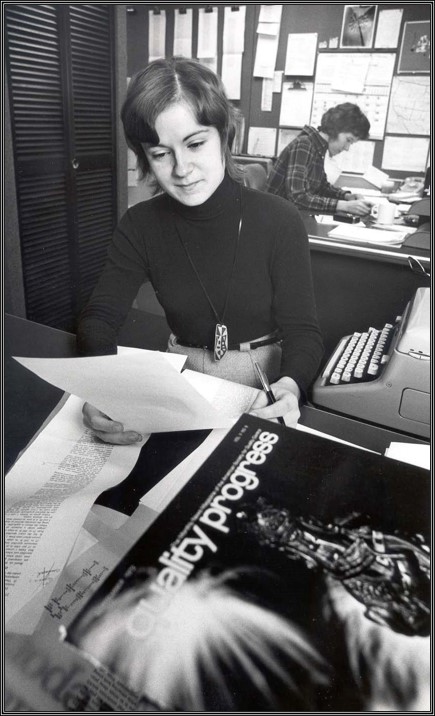 Karen Gebarski (1973) at her journalism internship for Quality Progress Magazine. Her internship began in the fall of 1972, the second semester of Alverno’s new OCEL program. She was among the first 24 Alverno students to participate in the program.

Alverno's Ability-based curriculum (formerly known as Competence-Based Learning or CBL) was introduced in 1973. Also, the Assessment Center opened in conjunction with the new curriculum and the first Visitation Day was held for educators to learn about Alverno's teaching methods. 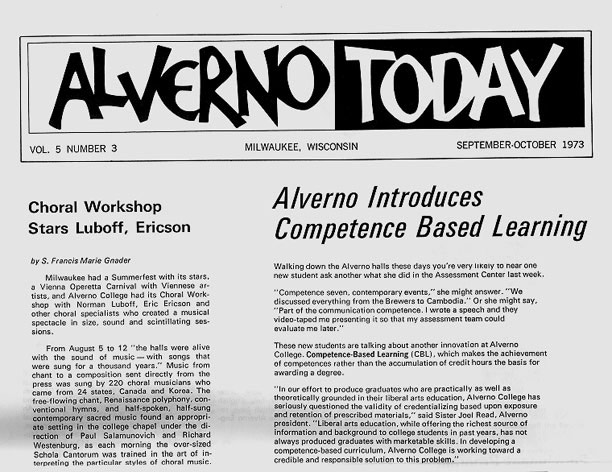 Robert Pitman became Alverno's fourth Vice President of Academic Affairs/Academic Dean and the first lay person to hold that title in 1974. He continued as Academic Dean until his death in 1978. 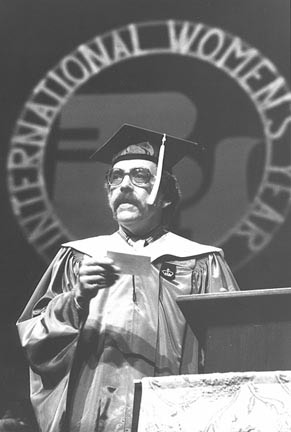 Planning for the Alverno College Archives began in the Summer of 1974. At that time, College President, SisterJoel Read appointed Sister Joanne Barras, a former business education instructor, as the first college archivist. After initial preparations and training for Sister Joanne, the Archives was officially established in January 1975. Sister Joanne remained as archivist until her retirement in 1987 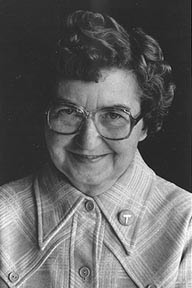 The Business/Management Department was established in 1976. It is now a division in the School of Professional Studies. One of the early faculty members in the School of Business was Sister Kathleen O’Brien. This is a 1981 photo of her with a student. 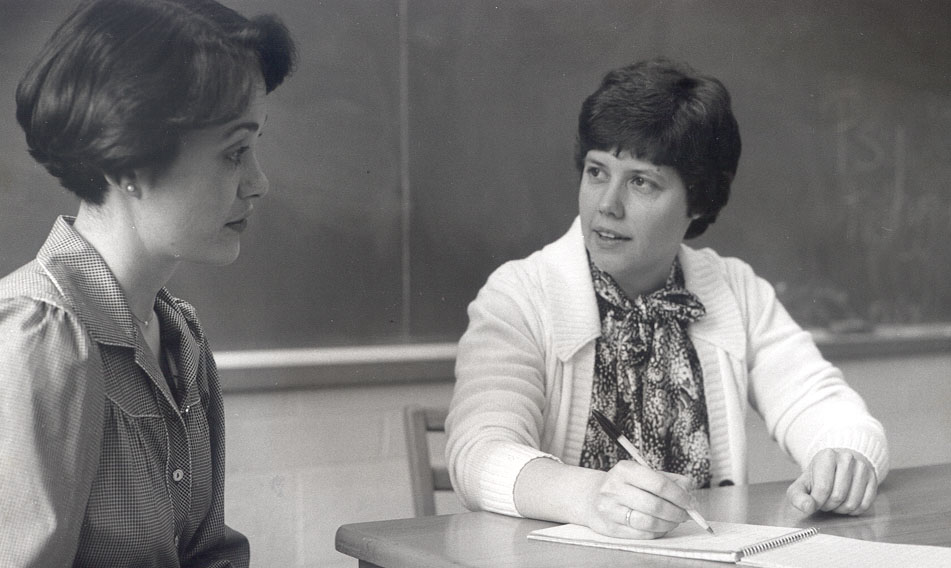 The Center for Instructional Communication (CIC), now known as the Media Hub, also opened in 1976. Click here to learn more about the Media Hub. 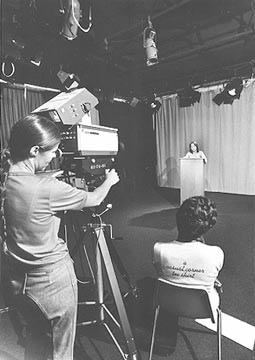 Weekend College (later known as Alverno on the Weekend), another pioneering effort by Alverno College which existed for close to 40 years, opened its doors in August 1977. It was announced in the February 25, 1977 press release below. The response to Weekend College was phenomenal with close to 350 inquiries within 48 hours of its announcement. 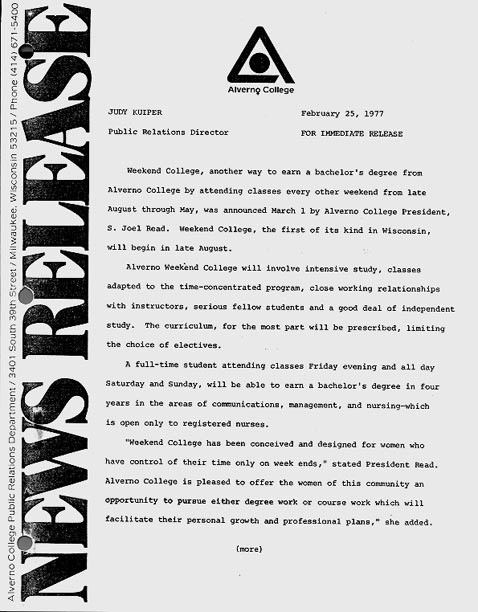 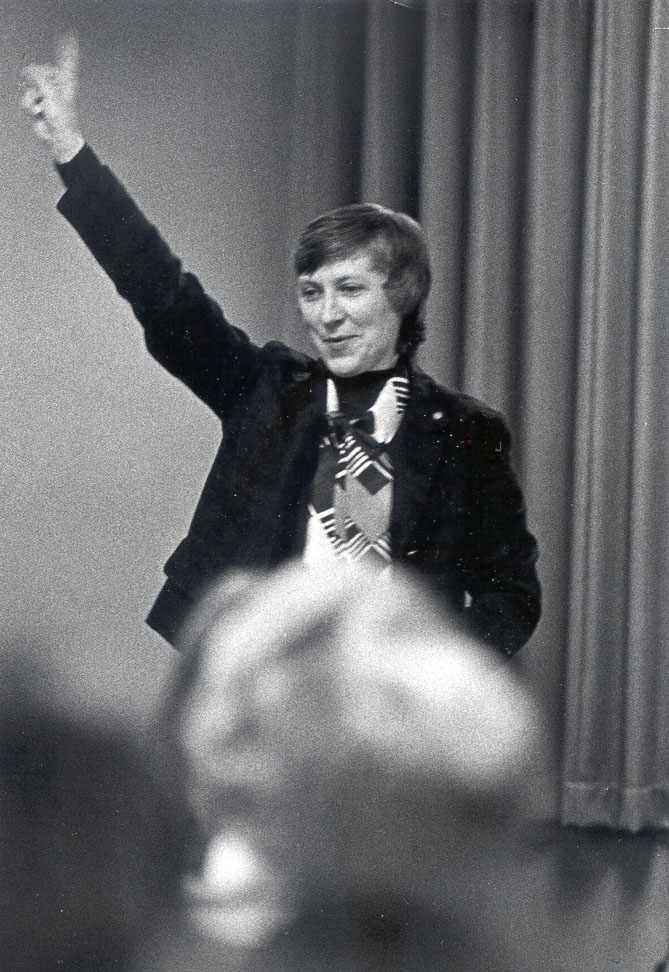 In May 1977,  the first class that went through Alverno's Ability Based Learning curriculum, graduated. 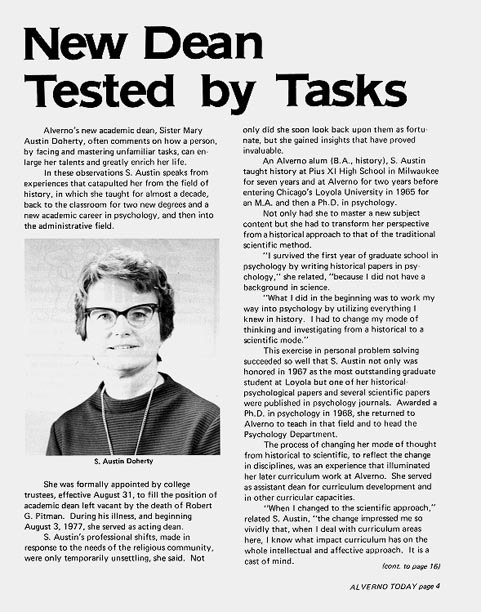 In September 1978, the Alverno Board of Trustees unanimously approved the renaming of the Alverno Auditorium as a memorial to Robert Pitman. The Robert G. Pitman Theatre was officially renamed at a small ceremony on December 16, 1978 following the reopening of Theatre Alverno with a retrospective revue produced by actor and actress friends who worked with Robert Pitman throughout his years in Milwaukee. 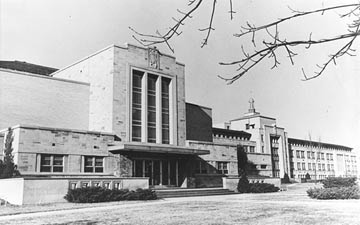 Also in 1978, Instructional Services began operation with Marlene Neises as director; offered were one reading class and one writing class each taught by Sue Witkowski.