Reaching Out in New Ways: Highlights from the History of Alverno's Research Center on Women

A precursor to today's "Community Day" at Alverno, Seminar Day, was created as "an opportunity for students, staff and faculty [and sometimes members of the Milwaukee community] to come together to learn from one another, share information and resources, take a break from the regular grind, and rejuvenate as lifelong learners." Seminar Day typically focused on one topic such as "chaos," "creativity," or "democracy." The Research Center on Women sponsored two such days. The first, "Women and the City," focused on women in the urban environment. The second was on Wisconsin women and was entitled, "Wisconsin Women Making a Difference."

The Women in the City Symposium focused the urban environment and its effect on women. The keynote address delivered by Susan Saegert, Ph.D., Associate Professor in the Environmental Psychology Program at the Graduate School and University Center of the City University of New York' s address was titled "Women in the Urban Environment,"  and described a broad picture of the problems faced by women nationally in urban areas.

This is a memo dated December 14, 1981 that announced the upcoming symposium that was sent to Alverno faculty, administrators, and staff by Sister Austin Doherty, then academic dean. 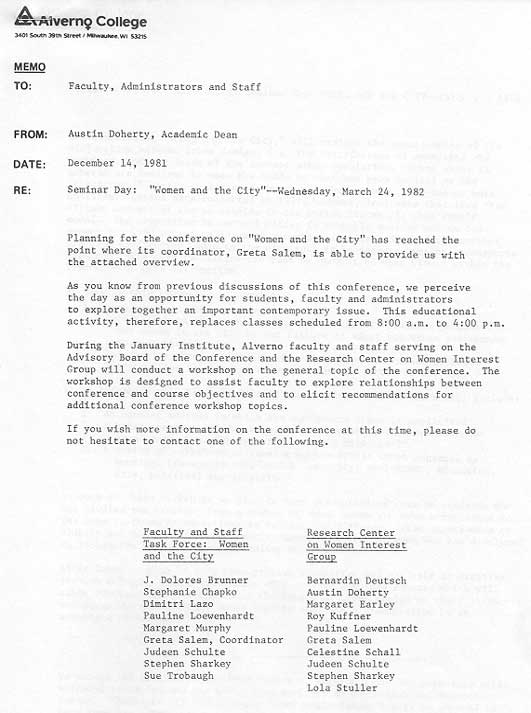 Accompanying the memo was a progress report  which described "Women and the City" as a conference "to explore the consequences of the disjunction between urban design, i.e. the distribution of amenities and services, and the needs of the current urban population. Urban areas in general are designed to meet the needs of what has been defined as the "traditional" family--a mother at home, a father at work, and one or more children." 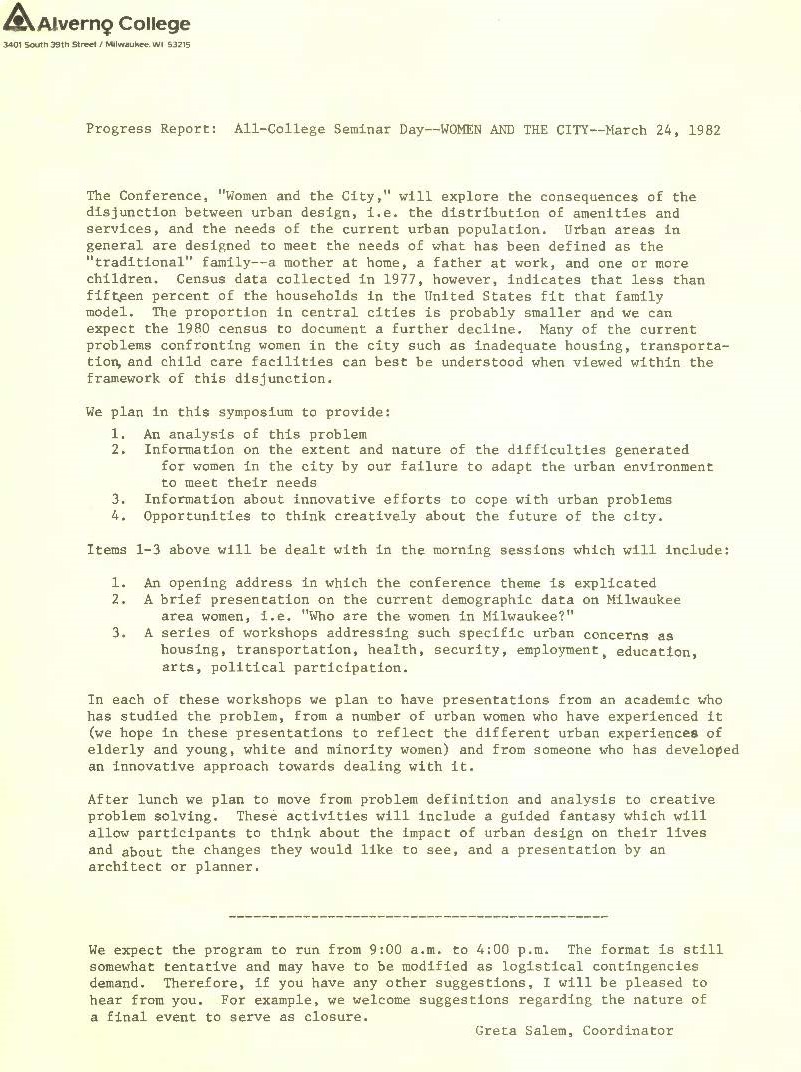 Here is a link to a printable version of the December 1981 memo and progress report. [PDF]

The promotional brochure below described the symposium including its focus and some background information. also included was registration information and the schedule for the day. 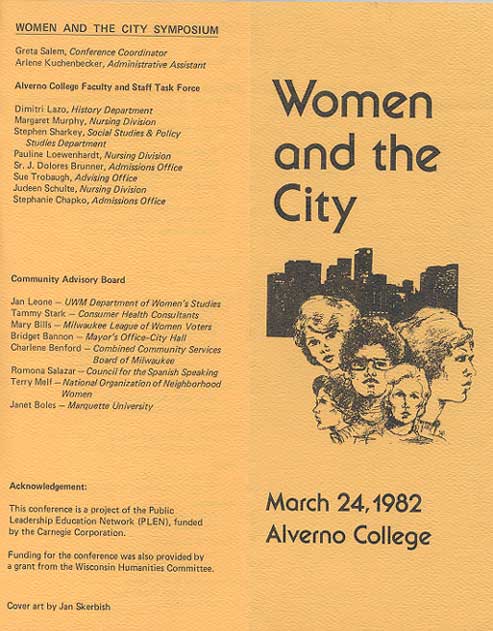 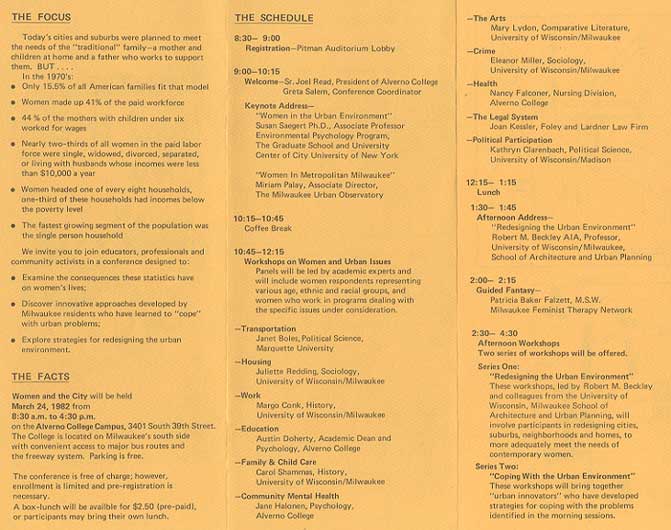 Here is a link to a printable version of the brochure. [PDF]

This article about the "Women and the city" conference appeared in the April 5, 1982 issue of Alpha, the Alverno student newspaper. 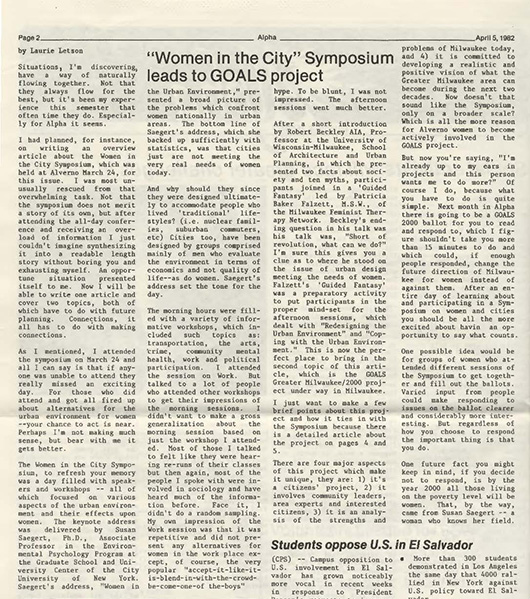 Below is a link to a printable version of the Alpha article.

During this seminar day faculty, students, and Wisconsin women from different backgrounds and communities came together in conversation to share their experiences, influences, and how they make a difference in the lives of others and the larger community. Included were numerous workshops, speakers and panel discussions on a wide variety of issues.

The flyer below described seminar day and the theme, "Wisconsin Women Making a Difference" and included a schedule for the day. 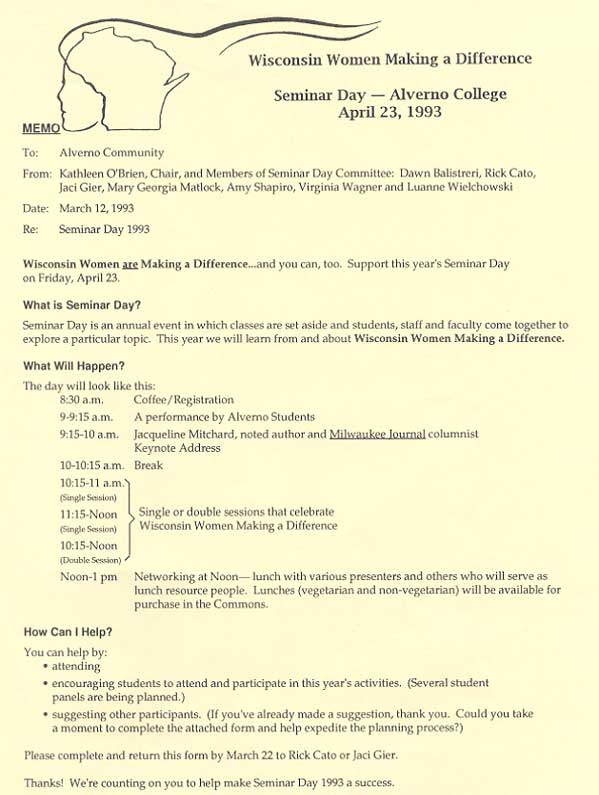 Here is a link to a printable version o the flyer. [PDF]

An article about the upcoming seminar day appeared in the March 1993 issue of Alpha.

Below is a link to a printable version of the article. [PDF]